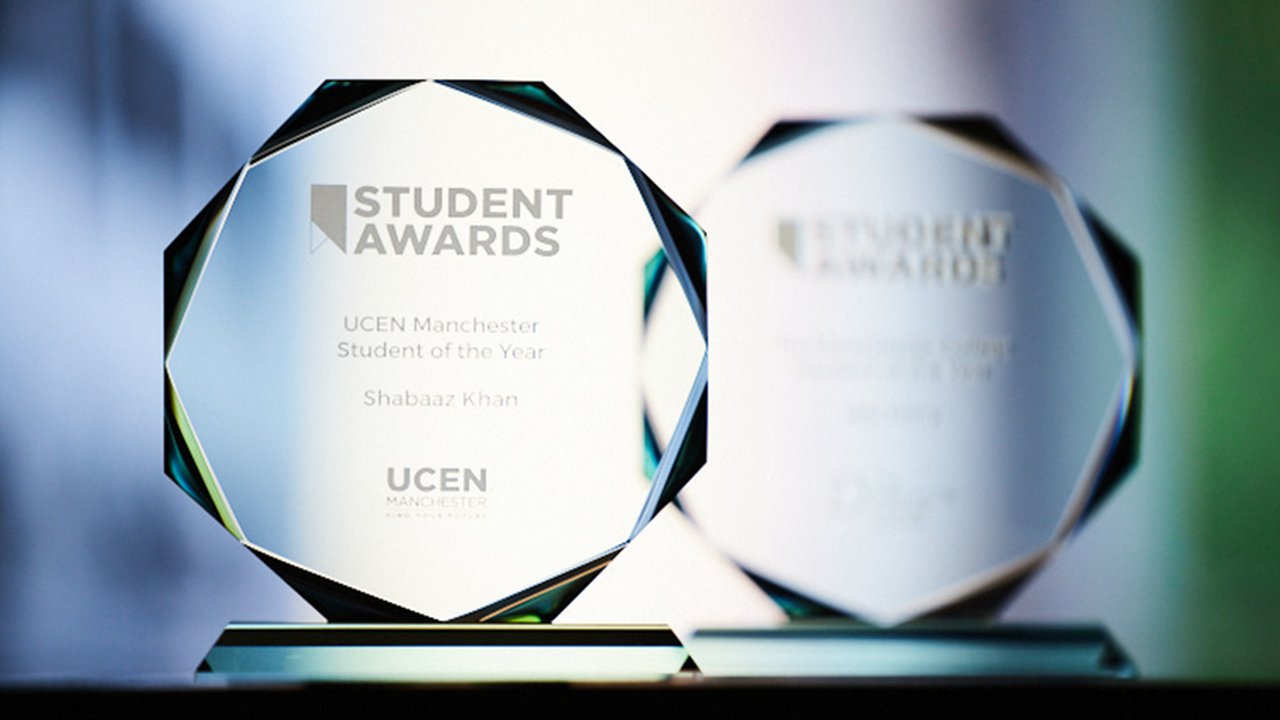 A group of colleagues and students at UCEN Manchester came together on Wednesday 8 June at the Imperial War Museum in Manchester to find out who had won this year’s Student Awards.

Throughout the evening, attendees heard about the finalists’ remarkable achievements over the last 12 months and found out why they were nominated by colleagues and their peers.

Speaking about the awards, Michael Walsh, Dean of UCEN Manchester, said: “Our Student Awards are always great events, and I was delighted that our students could collect their awards in person this year for the first time since 2019.

“We’re committed to providing our students with a career focused learning experience that puts them on a direct path into employment and offering the right support to help them thrive and succeed.  The nominations our students received for this year’s awards really brings their experiences to life.

“I’m so proud of everything all our students have achieved over the last 12 months and thrilled that we were able to recognise our finalists by inviting them to a wonderful celebration to showcase their achievements.”

Tutor Katy Rushton was at the event to support the students she nominated, including Shabaaz Khan, and explained the importance of the event: “This year, more than any other, I wanted to nominate our amazing students because they’ve missed out on so much over the last few years.  Their educational experiences have been completely different and I’ve been inspired by their perseverance.

“When it comes to writing nominations, I’ve always got so much to talk about because all our students work to a really high level and support our employer partners with live briefs, which is something I’m keen to celebrate.

“It’s great to see some of the students I nominated at the event and recognised in this way.”

Shabaaz added: “I’ve had a great experience with both The Manchester College and UCEN Manchester.

“I’ve learnt so much about animation and design in general.  I couldn’t have asked for anything more and, receiving the Student of the Year Award is brilliant.

“I can’t wait to achieve more with UCEN Manchester, thank you so much."

Open to all UCEN Manchester students:

Counselling, Health and Social Sciences Student of the Year

Film and Creative Arts Student of the Year

Management, Digital and Engineering Student of the Year

Performing Arts and The Arden Student of the Year